To celebrate the 100th anniversary of the AAF Baltimore, the AAF Baltimore’s board of directors have introduced The Katherine Mahool Fowke Iconoclast Award – named after the foundation’s founder – and have chosen Harvey Agency’s CEO, Kathy Harvey, as the recipient of this prestigious and culturally significant award.

Named in honor of the first president of the organization that eventually would become the American Advertising Federation of Baltimore, the Iconoclast award celebrates women in advertising, marketing, business, and design who have redefined industries, defied stereotypes, and torn down barriers to success so that others may follow.

2020 is the inaugural year of the award, coinciding with the 100th anniversary of the founding of the Women’s Advertising Club of Baltimore — the precursor to the current AAFB. As its first president, Fowke cut a new path forward, showing the world that women could lead in this industry at a time when they were just receiving the right to vote. In addition to starting what may be Baltimore’s first woman-owned advertising agency in 1926, she was also the first woman to serve on the prestigious board of the Associated Advertising Clubs of the World. This award honors the creativity and tenacity that drive change and inspire generations.

Honored to receive such an award, we also can see how fitting it is for Kathy to be the recipient because of her tenancious ambition as the CEO of her woman-owned advertising agency. Straight out of MICA with entrepreneurial passion and determination, Kathy sought to motivate and promote women in a then male-dominated business realm. Being one of four sisters, she decided to start her own company in 1986, which was appropriately called “Harvey & Daughters.” 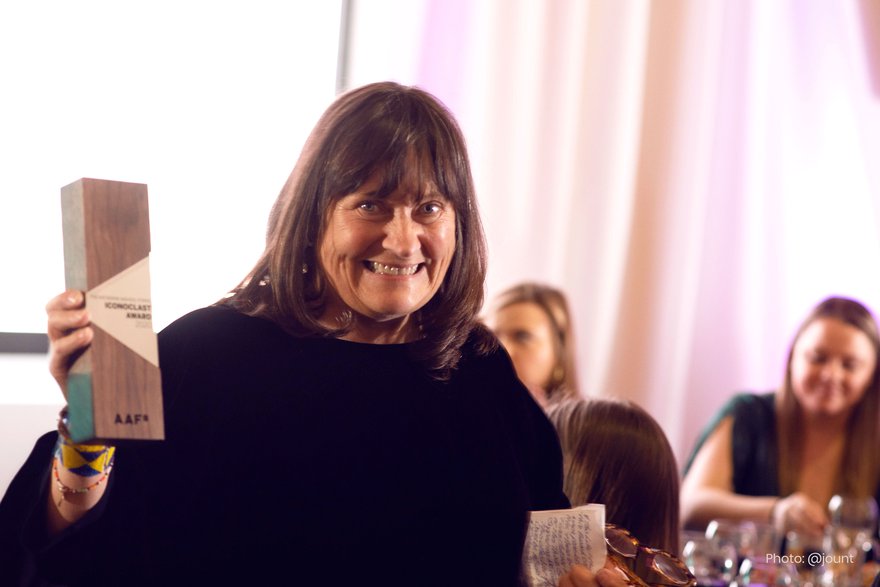 A Little more about Kathy Harvey

Dog lover, rock n’ roll connoisseur, and agency owner (in that order), Kathy Harvey’s career began humbly in the basement of her parent’s home in 1986. Like a millennial ahead of her time, Kathy lived and operated her agency, Harvey & Daughters, from that basement until being nudged out at the tender age of 27. But by that time, Kathy’s efforts tackling most everything on her own—creative, sales, billing, you name it—had already made significant headway. And within six months of hanging her shingle as a single-person, female-owned and operated agency, Harvey & Daughters had grown from handling projects for neighbors and former colleagues to landing two marquee clients: Noxell’s Covergirl and McCormick Spice.

With the momentum of those wins, Kathy continued building her team and client base over the next few years, pushing Harvey & Daughters in its mission to provide exceptional packaging design to CPG brands. Kathy’s knack for building strong client relationships (typically over strong drinks), exceptional work product, and an unrelenting desire to do anything to solve client problems, no matter how large or seemingly small, proved to be a winning formula. As client satisfaction grew, so did the variety and scope of their requests, eventually reaching beyond Kathy’s initial focus for the agency.

Famously never one to let a client down, Kathy invested in expanding the agency’s offerings, adding expertise in shopper-based design, point-of-purchase displays, print and radio advertising, brochures, etc., laying the foundation for what would grow to become the Harvey Agency today—a full-service branding and design firm with deep consumer product expertise across traditional and digital marketing channels.

From BARCs to Flying Dog Brewery, Schmidt Baking Company to Stanley Black & Decker, Phillips Seafood to Glory Days Grill, and every client in between, Kathy Harvey, over the last 30+ years, has built one of Baltimore’s most long-standing, biggest little agencies in town. With dozens of advertising awards—a coveted Communication Arts Global Award of Excellence, and the sales-audited Dieline/Nielsen Design Impact Award—there is one thing that remains the best reflection of Kathy and her commitment to building winning client partnerships: That from Noxell to Procter & Gamble and then Procter & Gamble to COTY; through countless sweeping client-side management changes and the comings and goings of global agency partners, Kathy and the Harvey Agency have retained Covergirl—the agency’s first large client—for nearly 35 years and counting #relationshipgoals, a feat few agencies or owners anywhere can lay claim to.

Next post: A Marketer’s Perspective: COVID-19
Back to blog

Stay in the know.

We don't keep secrets. Sign up now to get the monthly Harvey update.